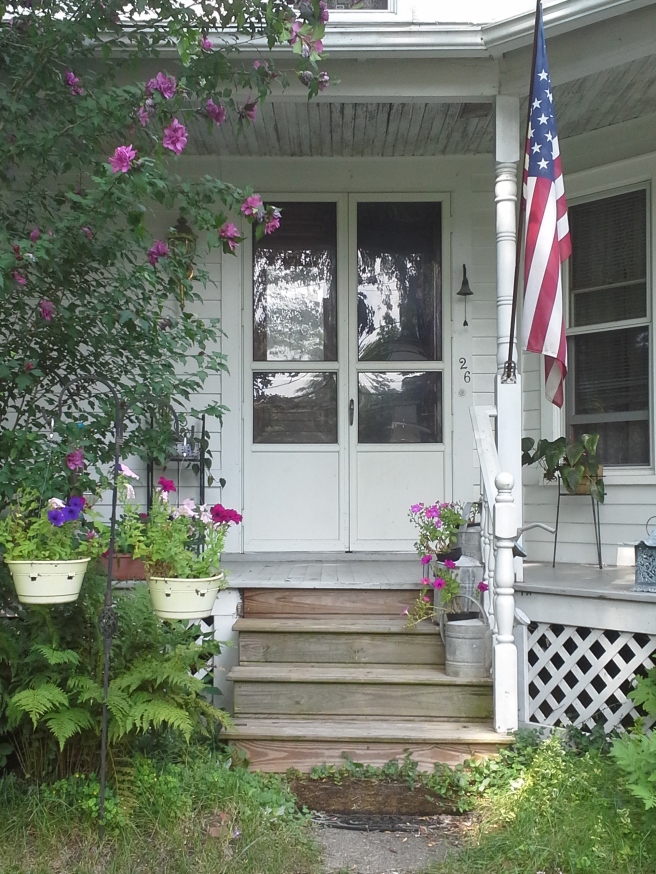 The American flag flies proudly on my front porch from Memorial Day to Veterans’ Day each year.  I choose to tuck it away during the winter months, away from the sleet, snow, and winds.  I have always been proud of our country, but for the last few years, there has been a change in the way we function together.  Of course, there were always disagreements, and the political parties seldom agreed, but there was a spirit of compromise.  Without compromise, nothing is accomplished.  We are no longer united, and our divisions become deeper and more volatile as each year passes.

Politicians choose a platform, and refuse to compromise.  If they do change their feelings about issues, colleagues and citizens view this as a weakness, a “flip-flop”, or as an attempt to mislead others.  Intelligent, thoughtful people do change their minds over the years — their insights grow over time.  Our country is better off with leaders who can see both sides of a situation, and use their knowledge and intellect to find compromise over divisive issues.

Personally, there have been two issues, which are still relevant today, on which I have altered my original rigid positions.  When I was young, it was my religious belief that abortion was wrong, and that it should be illegal in our country.  As I grew older, I realized that this was my personal view, but if I looked at it another way, I could see that our country was founded on freedom of religion, and majority rule.  It was not my place to decide that abortion should not be legal.  I still do not believe abortion is right  but I do believe that the majority of people in this country decided it should be legal, and that is how it should be.  Just my opinion.

The second issue, gun control, is one that is passionately debated in our country.  When I was young, a friend of ours was killed when a rifle accidentally discharged as he was removing it from his car.  This was a boy who hunted and was familiar with firearms, and yet he was dead.  For years this colored my views on gun control.  I felt that if there had been gun control, Bruce would still be alive.  And, of course, we have had too many murders, and too many mass shootings through the years.  However, I have thoughtfully considered this subject for a long time, now, and my views have changed.  I still believe there should be strict background checks when guns are purchased, and stricter controls at gun shows.  I still feel that automatic weapons should be outlawed.   I believe gun control is an issue that must be discussed calmly and rationally.  I notice that much of the division over gun control lies between city dwellers and those who live in the country.  People in the city see gang shootings and domestic shootings and think that if gun controls were more strict, we would have less killing.  Those in the country see their guns as a tool.  They hunt with them; they protect their families and livestock from the dangerous wildlife that roam the countryside.  City dwellers are also probably not aware of how long it may take police to arrive on the scene when you live in the country.  If someone is threatening your family, a gun may be your only protection.  There will always be “crazies” in this world who use guns for the wrong purposes, but these same crazies will find other ways to kill if they don’t have access to guns.  We have already seen knives and bombs used in mass killings.  I believe we must recognize the reasons why so many people are adamant about their right to bear arms.  Again just my opinion.

Unfortunately, there are no perfect solutions to most of the issues that face our country today.  However, maintaining your “rightness” instead of listening to all sides of an issue solves nothing.  I truly believe that our country will not be healed until people are willing to talk TO each other about the divisive issues, not AT each other.  We need to really listen to each other and understand the reasoning behind other people’s stands on issues.

And most importantly, we must encourage our leaders to do the same.  We must not accuse candidates of being “flip-floppers” just because they have changed their minds on issues through the years.  Times change, situations change, and I would certainly hope that the leaders we choose feel free to change their own minds.

We are all Americans; we all love our country and want a successful, thriving democracy, but at this point we are losing ground.  This inability for parties to work together is tearing us apart.  They must learn to find common ground, and so must we, if our beloved country is to survive.  It begins with us!!